It was my brother in law's birthday and i wanted to make a Cake for him. The challenge was to make it without BUTTER, SUGAR AND OVEN!! Utilizing my experience and bit of google research, i came up with this recipe.

Take a Cooker and place it on the stove. Spread sand or salt at the bottom and start heating at medium speed.

Grease cake tin that will easily fit in the cooker.

Mix all the Dry Ingredients. Pass the mixture through a fine sieve twice.

In another bowl mix condensed Milk and Oil. Add few drops of Vanilla Essence. Now, slowly add the dry ingredients into the bowl. Mix well to form cake batter. Do not over Mix.

Pour the batter into already greased tin. Sprinkle the chopped almonds and pistachios on the top.

Put a  stand in the cooker. Place the cake tin on the stand inside the cooker.

Reduce the heating level to low.
Remove gasket ring and whistle from the cooker cover and place the cover on the cooker.

Remove the cake tin from the cooker and allow it to cool. Once cool, flip the tin on a plate and the cake will come out easily. Enjoy !!!

Posted by Nidhi Shah at 6:36 AM No comments:

Toss the cauliflower florets with little olive oil, pinch of salt and pepper and place them in the preheated oven for cooking. Cauliflower would be nice and crispy within 10-12 minutes. If they are not crispy, broil them for 1 minute.
Meanwhile put a small pan on medium heat. Add 1 tsp olive oil. Add Tahini, lemon juice, black pepper, salt and stir continuously. Adding lemon juice gives a nice foamy texture to tahini. Remove from heat. Add chopped Parsley and Basil.

Mix this with the baked crispy cauliflower florets and Cauliflower tahini is ready to eat :)
Posted by Nidhi Shah at 8:28 AM No comments:

I dread of Saturday mornings thinking what to cook! It was one of those Saturday mornings and while I was talking to my aunt over phone back home in India she told me that she has made Pongal and coconut chutney! Didn't miss this golden opportunity to take the recipe from her and in no time Pongal was ready for our Saturday brunch :D 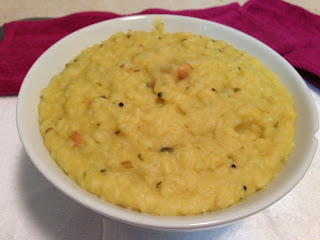 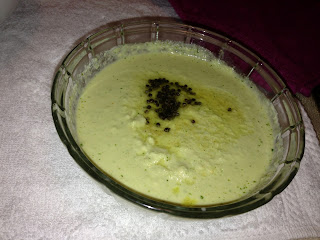 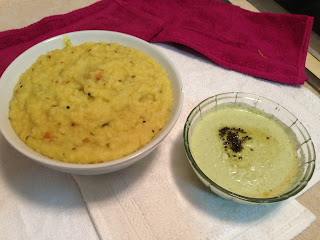 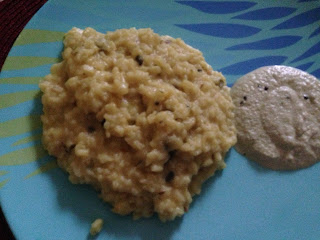 Posted by Chitra at 8:26 AM No comments:

We miss Gujarati snacks (farshan) every now and then. Few days earlier, I was watching Masterchef India and in the elimination round contestants had to prepare Khandvi. That was enough to tempt me to make Khandvis. I am sharing with you all simpler version of Authentic Gujarati Khandvi recipe.

The tricky part for Khandvi is the batter consistency.  Mix all the ingredients for batter and mix well to get a lump free batter.Grease back part of the plates or your cooking surface. You can even spread out an aluminium foil on a flat surface and grease it.

When cooled, cut the Khandvi length wise with around 1 1/2 inch width. Roll up gently starting from the smaller side. Repeat this for all other Khandvi's. Place the rolls in the plate.
For Tempering, heat oil in a small pan. Add Mustard seeds. When the mustard seeds start crackling, add Asafoetida, Green chillis and curry leaves. Turn off the gas. Add Sesame seeds and pour the tempering over the khandvis.

Garnish with grated coconut. You may also use dessicated coconut.
Delicious, Mouthwatering Khandvis are ready for eating !! :)

Try this at your home and let me know how it turns out. I read somewhere, that it can be made in Microwave also. If you try, please share your experience !!
Posted by Nidhi Shah at 8:24 AM No comments:

I have been wanting to bake this eggless marble cake for a while ever since I was not very successful the last time I baked. I made few modifications and it turned out to be a hit! Here is the recipe!! 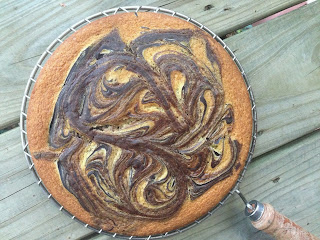 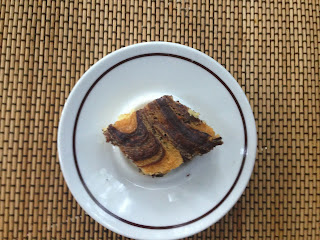 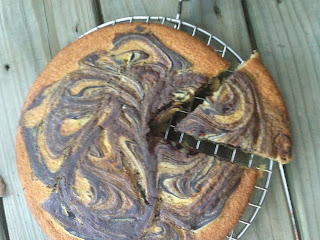 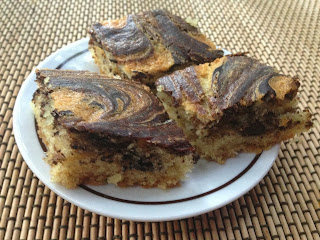 Posted by Chitra at 9:14 PM No comments:

I call these Mysterious Plum Rolls, because you wont believe the ingredients that combine and make these delicious rolls. I had Plums in my refrigerator and was thinking what can i make from them, other than the usual jams, cakes and chutneys? My colleague shared this recipe with me and when i tried it, it turned out to be awesome. Simple ingredients, quick and simple recipe with awesome result!!

Wash the plums, take the pits out and leave them to drain in a strainer.

In a pan melt butter and add bread crumbs, mix and stir until they are light brown in color. Add 1 Tbsp sugar and cinnamon.

In another medium sized bowl, add mashed potatoes, flour, salt. Mix everything, until a soft dough is formed.
Put one sugar cube or granulated sugar in middle of every plum and place them on a plate.

Keep one pot of water to boil.  Divide the dough into three portions. Make balls of each portion, flatten with your hand and put a plum in each one. Then, round the dough around the plum covering the entire plum with the dough. Repeat for all plums. Add the dough covered plums in boiling water. The plums will rise above in water when they are done. Once they come on surface, remove them with the help of a slotted spoon and place them directly into the bread crumb mixture. Roll them well in the mixture and they are ready to be served !!
Posted by Nidhi Shah at 10:44 PM No comments:

Baklava is a Greek sweet pastry.  Its a very easy and simple dessert, if made from Phyllo Pastry. Phyllo is available in almost all grocery stores in the frozen section.  Enough talking, Let me quickly take you through its making :)

Thaw the Phyllo Pastry according to Package Instructions.  Mix nuts, cinnamon and 1/4th cup Sugar in a bowl and set aside.  (Note: Traditionally Baklava are made from Walnuts, but adding Almonds, figs and coconut flakes enhances its taste and texture. Ratio for the mixture is 4:3:1:0.5).

Melt Butter. Now, on a greased baking tray, start layering the Phyllo. Create a layer of 6 sheets, brushing each sheet with butter before placing the next sheet over it.
Spread half of the nut mixture evenly over the Phyllo.
Layer 2 Phyllo sheets over the mixture. Brush Butter in between the two sheets.
Spread the other half of the mixture evenly.
Create another layer of 6 sheets on the top of the mixture, brushing butter in between the sheets.
Make diagonal slices to make a diamond pattern. Feel free to make pattern of your choice.
Place the baking tray in the preheated oven and Bake until the top is golden brown.  It takes around 40-45 minutes.
While the baklavas are baking, prepare its syrup. Add half cup each of water and sugar in a bowl. Allow the mixture to boil. Add 1 tsp of Lemon juice. Lemon juice will prevent the sugar from crystallizing. You may add Cardamom powder for extra flavor. Once the sugar is dissolved, add honey and stir well.  Stir occasionally until the syrup has started thickening. Switch of the flame and allow the  syrup to cool.
Once the baklava are done, remove them from the oven. Pour the syrup in the cuts. Set them aside for setting. Allow them to set for around 8 hours, though there is no harm in tasting before they are set ;)

Enjoy this mouthwatering Mediterranean dessert in your sweet home!!
Posted by Nidhi Shah at 11:12 PM No comments: